Wingman (or wingmate) is a role that a person may take when a friend needs support with approaching potential romantic partners. People who have a wingman can have more than one wingman. A wingman is someone who is on the "inside" and is used to help someone with intimate relationships. In general, one person's wingman will help him or her avoid attention from undesirable prospective partners or attract desirable ones, or both.

Now, there are many strats for this, but the main one is to be as funny and outgoing as it gets, but without sending any sexual vibe. So you go to a group, introduce yourself and ask for everyones names, the usual, and just start a normal conversation, making sure you are really liked by the friends but neutral to the target. Now everything the target says, relate it to your friend. "Oh you have a puppy? Well my friend here is studying law to fight as an activist for greenpeace because he loves animals so much, he is adorable" "Oh, you do yoga? My friend here is always telling me how he wants to try to connect with himself and how spiritual he is, he is so deep and handsome and has a 7 inch dick" You get the point. If your friend isn't completely autistic, he will eventually start talking only to the girl he has sooo much in common with while you distract the other ladies by being obnoxious about how gay you are and how much you are waiting for the new season of the vampire diaries (is that even a thing anymore?). Mission acomplished.

If you're reading this you probably already have the social skills needed for a wingman (and if you don't, you should acquire them). If your friends don't have those skills either, lead by example.

Communication skills within your group

As we explained in the previous section, for the work of a wingman in a group of friends to be really profitable, a little bit of politics is necessary.

It's good to be a wingman just for friendship or generosity, but to get the most out of it you need to go a step further. If you manage to spread the attitude, the benefits for everyone will multiply.

An example of a good message:

Hey guys, I met a group of girls yesterday, I invited them for a party, I thought you would like it, what do you say?

An example of a not-so-good message:

Hey guys, I met a group of girls yesterday, wanna go to a party tomorrow?

The difference is subtle, but the first message communicates agency, and the second doesn't.

You don't need to call it a wingman, your friends don't have to know anything about seduction, but they should know that you are doing a job for the benefit of everyone.

Why? Because as we explained before, some will copy you, even if inconsistently, and increase the opportunities for everyone.

Besides, if your friends manage to value this feature of you (which they will only do if they are aware of your work), they will be able to act as involuntary wingman with you, because they will speak positively of you.

Putting the right people in touch

I've had a guy come up to me and say, "Hey, my friend over there thinks you're really cute; do you think you could talk to him?" This puts me in an awkward position because well...if he wanted to talk to me, why couldn't he come up and talk to me himself? This style of approach also just makes me think the guy himself can't hold a conversation, and I'm more turned off by it. [i]

This is precisely what you should not do, it seems forced and creepy. Making people feel uncomfortable is not a good idea.

As a wingman you must first generate a relationship or rapport. Only then do you introduce or compliment your friend.

As we already said, seduction is a fundamentally superficial process [2]. If your friend is attractive, then there's a lot of terrain already cleared. Shyness, or average to poor looking people require much more work.

Find the weaknesses of the person you are trying to help, and build a story that tries to reinforce his or her strengths. But don't build stories that are impossible to maintain in the future, try to make them as true to reality as possible.

Is there any science behind this?

Yes, you look better in a group that you do on your own. One study had participants evaluate pictures of 300 people, and found that faces were significantly more attractive when they were shown in a group photo compared to the same faces shown on their own.

There are plenty studies about animals using cooperative courtship strategies, like this one about wild turkeys, lance-tailed manakins, fireflies, etc. 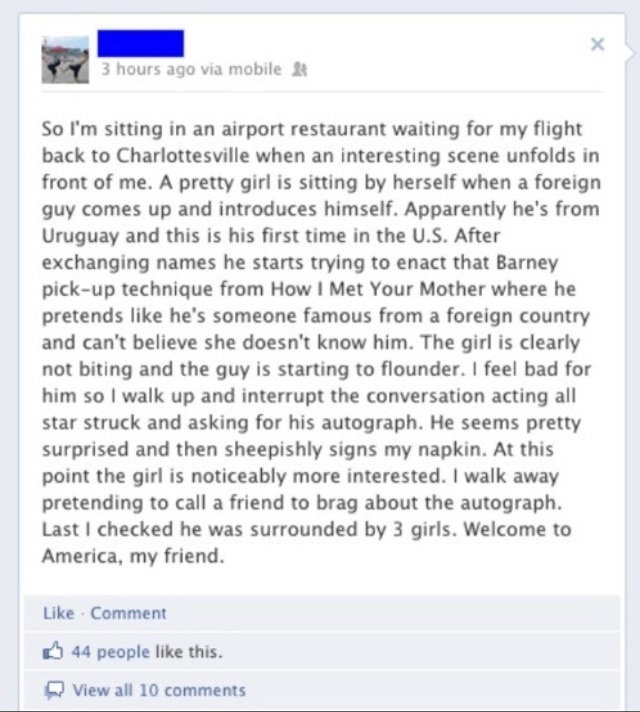